Skip to Content
Home Travel London SuperSuper and the FashionRevolution

Yesterday, on my sunny day off from my new fashion course in London, i made my way down to Temple tube station…
Before i even got to Somerset house, i was cheekily drawn to a well placed magazine stall outside the tube where they stock delights such as Lula, 10, Exit, various foreign Vogues, Dazed, Pop, Tank and my most eye grabbing favourite, SuperSuper. Certainly worth a flick through considering i helped produce the issue! During this rushed skimming of pages, i discovered a spread at the back dedicated to the Reebok Freestyle party in conjunction with SS which i went to in Aug and there, in 2 tiny little pics was me!! ME IN A MAG! *Squeal*. Check it out, i’m wearing the most ridiculous pair of shorts that were my dungarees when i was 7 that i have finely converted my chopping and stitching (ecotastic).
To backtrack briefly, here are a couple of snaps of me at the party waay back..

Namalee in THAT leotard that i sneakily persuaded Pam Hoggs people to let us borrow!
Schtunning 🙂

Yucky picture of myself with Michelle and Thomas and below, Dan from SS

So that was a whistlestop tour of the party and i have yet to buy SuperSuper to attain the images of me! But for now, back to the reason for my journey in the first place.. Fashion Revolution… ///

At first i was afraid, truly afraid, the room was cave like with black ceiling and walls and lots of unfamiliar sounds and heads floating on screens.
The first exhibit you’re confronted with is a styling video by Alexander McQueen whereby he transforms a freaky white-faced groom into a zombied up bride/groom version of the already disturbing manthing…

However, it got better! and i was particularly interested in understanding what is meant by a ‘Fashion Film’. Its a term i’ve heard alot recently and i was perplexed by what exactly they show. I enjoyed Tim Walkers ‘

Whats in Vogue?’ and ‘Yer ‘Avin’ a Bleedin’ Larf Ain’t Ya?’ both of which were lighthearted, bright and short. Less inspiring (simply by the way it was what i thought a fashion film could be like) was a digitally enhanced ethereal style film with a model who was just a bit cheesy.. ah well.. it was still technically very well made…
These stills are from one of Kate Moss jumpin around like a nutter which was great! It made me happy that shes able to unleash an inner monkey to groove like that! 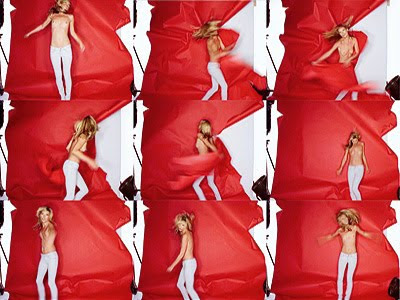 Pic from SHOWstudio.com
After leaving the exhibition (2 hours later..) i realized just how appallingly little i knew about the significance of SHOWstudios work in fashion. This is a truly fascinating show with incredible technology inviting viewers to interact in a wide range of ways from picking up a telephone and listening to Lily Cole or moving a ball around to ‘listen’ to the sound of a jacket. It reveals how fashion can be accessible to everyone, even the bits you never thought were and with the greatest of technology to enable just that. See it! ///